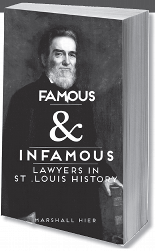 In the summer of 2014, BAMSL published a 145-page paperback book, a compilation of the history articles from the St. Louis Bar Journal written by Marshall Hier over the past 25 years. The articles include duels, disbarments, first lawyer in St. Louis, first black lawyer, lawyers before the Civil War, Unionists and Confederates during the Civil War, first woman lawyer in Missouri, attorneys for the owners of Dred Scott, members of Lincoln’s cabinet, a United States Supreme Court Justice, first judge of the U.S. District Court for the Eastern District of Missouri, governors, senators, judges, mayors, corruption fighters, Missouri Supreme Court Judges, a founder of the American Bar Association and many others.

This book is a great addition to your library or a great gift.

Board and YLD election petition filing period is open through 5 p.m. on January 31, 2021.
https://www.bamsl.org/elections